In July I went to the opening of “African Spirits,” a group show of African photography from the 1950s to today, at Yossi Milo gallery. Upon entering the space, I turned to my left to start my stroll around the room’s perimeter when I met his gaze, and was immediately drawn in.

The Herculean man had neon-green hair on his head and chin, piercings in his nose and in his hulky pectorals, and a kinky leather collar. His vintage blue shorts were buttoned up to the middle of his smooth abdomen, and a diminutive fanny pack pinched his waist. His Doc Martens were decorated with black and pink furry pompoms, and, completing his fantastic ensemble, an electric pink robe, rolled at the wrists and suggestively falling off his left shoulder. Like Manet’s Olympia, he projected so many wonderful paradoxes: at once confident and vulnerable; seductive and guarded; masculine and feminine; insistent in his queerness, but untrusting of our voyeuristic presence. Perhaps somewhere under that campy pink robe was some scar tissue—wounds from years of rejection by a bourgeois society that does not understand him. Wounds which heal themselves when he can “live the fuck out loud” at the Afropunk Festival where this picture was taken.

I proudly added the photograph to my art collection, and reached out to the French-Senegalese artist Delphine Diallo to arrange a studio visit.

Based in Brooklyn since 2008, Diallo was born in Paris to a French mother and Senegalese father. She studied at the Académie Charpentier School of Visual Art and upon graduating in 1999, started working in the music industry as a visual effects specialist, graphic designer and editor. In 2008 a friend invited her to a dinner, where she happened to sit next to the photographer Peter Beard. “It was very surprising; I was meeting someone who was 72, and I was 31, and our energy was the actually same,” she remembers. They shared the same “curiosity, and openness, and discovery—like a child.”

Beard asked to see her work—an intimidating request for any young artist, but all the more nerve-wracking because Diallo admits she had never shown her work to anyone. Beard immediately recognized her talent, and invited her to join him on his next photoshoot for Pirelli in Botswana. On location, Beard showed her everything she needed to know to be a photographer. The most important lesson? Learning to let go and let the art happen: “You set up 50, 60 precent, ensure the set or the subject is the right person. But then after you can’t just control everything, you have to let go. And the space where [I] let go…the pictures that were the best ones were the pictures where [I] let go.”

Yet there were other formative experiences on the Botswana shoot as well: Diallo objected to what she saw as the “oversexualization of the male gaze,” particularly of the black female body, which she felt in Peter’s work and in the fashion industry in general. She also said there was editorial friction between her and the Pirelli production staff, who dismissed her as one more of Peter Beard’s pretty models (he has a reputation…). As painful as the dismissal was, it motivated Diallo to take her life in a new direction: she would move to New York on an artist’s visa, and devote herself to empowering and celebrating female beauty and energy—simply put, the Divine Feminine. 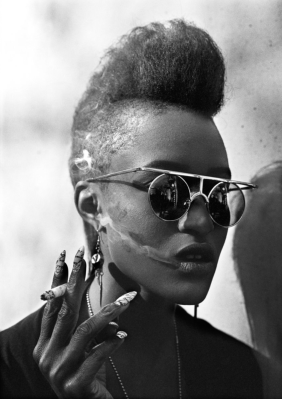 “The patriarchy is dividing us too much,” Diallo notes. We only see three or four archetypes of women represented in our society, whereas Diallo wants to “access many dimensions”: nature, humility, transcendentalism, emotionality, childish whimsy, and anger. “The woman is a real subject, because she is changing, she is transforming, she is sensitive, she is very emotional, she might be the most emotional creature on Earth. And to be able to photograph it, to be able to see her transformation…it’s not actually being shown that much in photography.”

Diallo works across a spectrum of styles, shooting street and documentary photography, portraiture, and fine artwork. When Diallo does take on commercial projects (she has worked for such publications at Time, The New Yorker, The Washington Post, Essence and more), she prefers assignments that meet her mission, or at least endeavors to lend a more thoughtful interpretation of the female body.

“Yomi, The Divine Feminine,” 2018, image courtesy of the artist. 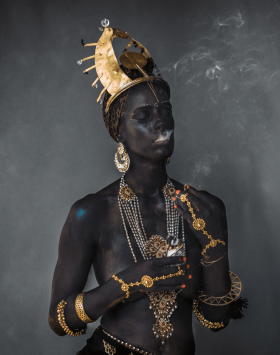 “Self-Portrait as Kali,” a collaboration with Indian body-painting artist Geeta. Image courtesy of the artist.

In her more artistic pursuits, Diallo captures the Divine Feminine in photographs of women in quiet repose; other times, she explores the Divine Feminine through the lens of religious iconography, mythology, or symbols of energy that are ancient and universal: she’ll paint her models with spirals, yin yangs or “the third eye.” Surveying the work, I thought, some of these portraits of feminine energy were quite literal. But then I asked myself: how does one capture something as elusive yet ever-present as the Divine Feminine—especially in photography? Abstraction seems an obvious choice for capturing “energy” (think the Action painters), but then how does one differentiate feminine and masculine energy on a canvas, without falling right into gendered language that reinforces sexist divisions and stereotypes? Whereas abstraction would deny the female body, Diallo and her models reify the female body as the vessel of our unique feminine energy; Female Empowerment occurs in the performance of the Divine Feminine.

In more coded imagery and language, Diallo’s collages were some of the best work I saw in her studio: richly layered works that do beg comparison to Peter Beard, although with a decidedly more feminist tone. Unlike Beard, Diallo maintains, she “treats collage in a transformative way…[my] use of ink and narrative is totally different.” Many works also address the racial legacy of African colonialism, a topic of which Americans are too ignorant, Diallo laments. But addressing racism, she says, is not her primary concern, because the Divine Feminine transcends all: “I am a woman,” she declares. “That’s the first struggle.”

Diallo and I talked for over two hours—well, I should say she talked, and I listened. She covered quite a lot in those two hours, and admittedly not always in a comprehensible way; it is not always easy to translate a visual message into a verbal one, especially for artists discussing their own work. “My brain is a collage brain,” she said at one point. It wasn’t until I was walking back to the subway from her studio that I realized what a self-actualized statement that was: Diallo had laid out snippets of her life and worldview—a shuffled deck of scraps that did not make perfect sense at first. But as we spoke, she tested, contrasted, and rearranged the pieces. By the time I left her studio, I had a clear vision of the collage: she had artfully composed a portrait of herself, quite without my noticing.